Movies and murder collide in 'The Death Kiss'

Some film historians ascribe the downward trajectory of Bela Lugosi's career to the fact that he went freelance almost immediately after the runaway success that as "Dracula" (while his fellow Universal monster-maker Boris Karloff remained loyal to the studio system and saw his career blossom).

They may be right. A bigger contributing factor may have been the fact that Lugosi made horrible choices when it came to the movies he made. If they had all been as good as White Zombie and The Death Kiss, maybe he wouldn't have died a drug-addicted pauper.

"The Death Kiss" is among the top five of my favorite films that Lugosi appeared in.

When the star of Tonart's latest mystery movie, "The Death Kiss", is killed during the filming of the climax, studio mogul Joseph Steiner (Lugosi) is convinced that it an tragic accident. But soon the police find evidence that it was actually murder, and suspicious swiftly falls on Marcia Lane (Ames), the dead man's widow. She was having an affair with screenwriter Franklin Drew (Manners), so she had both motive and opportunity to stage the killing. Her lover starts working toward proving her innosence by finding the real killer. But with the deceased having crossed just about everyone working on the production, and Steiner seemingly having an agenda of his own, will Drew clear his lady love, or will the killer add him to the list of victims first? 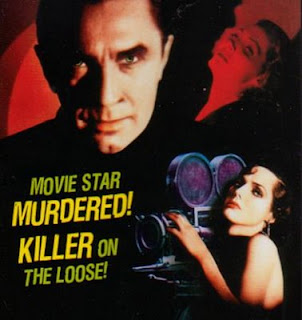 This low-budget mystery film is a surprisingly well-crafted and well-acted movie. The mystery is complex enough that the audience is kept getting up to the end--I admit to being surprised when the actual murderer was revealed and that doesn't happen often these days! As far as I can find out, "The Death Kiss" is also the first film about some of the behind-the-scenes aspects of making a film. (A number of the clues and red herrings even involve movie-making equipment.)

I enjoyed the film quite a bit. The gimmicky color-tinting didn't do a whole lot for me, but I suspect that it generated a lot of excitement to the people sitting in the theatre in 1933, just like I'm sure they were fascinated by the fictionalized glimpse into the Hollowood Dream Factory.